I apologise for such a lengthy radio silence, only for me last year kicked off early and didn’t stop until last orders.

There was a couple of movies and then a long stint on season 5 of HBO’s Game of Thrones which was fun. If you watch the show, you will no doubt imagine the kind of work involved, and it kept me busy as part of a pretty big crew.

To see some ‘behind the scenes’ stuff of season 5, check out the documentary on YouTube.

Todd and I have been chatting, and as we both let the blogging slip because of work we are back with a plan to do more podcasts to give responses to email questions on a regular basis.

Todd has been swamped in theatre stuff, notably productions of Shrek and Pinocchio – both with huge makeup challenges given the live performance nature of theatre.  No change for a second take or touch ups!

So, we caught up in this podcast to get the ball rolling again – listen here or download it from here to listen to later.  It was recorded on Friday 13th….so it isn’t about the movie Friday the 13th, so sorry to the Michael Myers fans…..this time we’re talking plaster heads and master moulds, plastiline and apps to help design.

Plaster Heads
One thing I realised is that to make blog posts (and of course especially videos), I really need to make something which of course takes time. Last year was so solid that there really wasn’t any spare time to make much, and when the trade hows rolled around, I had prepared much at all.

So this year I am making a few character makeups to give me deadlines and spur me on just like my normal work life. 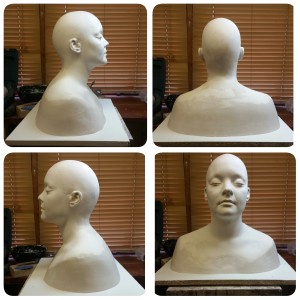 To that end, I did a full head cast of Emma Procter, a fantastic trooper who I met in the workshop last year.  The cast was done in silicone (I tried Go Cast by PS Composites which worked great) and I had the help of Julia Plant and David Brown, two folks who have worked with me in the past and who I trust implicitly.

The plaster head from this silicone mould was cleaned up (the odd air bubble and the bulk of hair from the bald cap shaved down) and fitted to a base board, made level and smoothed out at the base to make it smooth, solid and ready to master mould.

On Instagram? Be sure to check me out as often live updates will get posted fresh from the workshop.

It’s always fun to go and meet the people whose work you admire, hang out with like minded souls or chat with schools, teachers and fellow artists.  Trade shows are always a great time, and these are the main ones of note for makeup FX and prosthetics:
UMAE – United Makeup Artists Expo
IMATS London 2015
Creaturegeddon
Prosthetics Event

Plastiline
Plastiline is the main material used to sculpt appliances.  Essentially it is a wax based clay which doesn’t dry out, much like Plasticine that kids play with.

There are different brands with different qualities, and like anything where there is choice, people prefer different things and it can see confusing when you start out.

One make which is popular is Chavant, which make a number of plastilines in different softnesses as some people have stronger fingers or prefer a softer clay. They also make harder types for sculpting things with sharper detail.

One benefit of plastiline is that being a wax based material, it softens with heat and hardens with cold.  This being the case, the temperature of where you work is a consideration.  Blazing hot summer time?  Plastiline will be soft in the heat.  Freezing cold because of a rubbish central heating boiler of excess of air conditioning?  Then you plastiline will be firmer.

Another plastiline which is popular is Monster Clay, which is a great plastiline and comes in a tub which is microwaveable for easy reheating.  Thoughtful! Many FX supplierss tock it so try some if you fancy a quality sculpting material which is endlessly reusable.

In the UK, a lot or workshops use a grey or ivory coloured plastiline from ‘J. Herbin’. It comes in different grades and the lower the number, the softer it is.  50 and 55 are most popular but there is a 60 which is harder and a 70 which is harder still.  Jacobson Chemicals and Neills Materials supply it in the UK, so hunt around for stockists.

I’m am not a great creature designer.  The reason I know that for sure is because I know personally some great designers who can do it and trust me….I can tell.  That’s not to say I can’t create something from a design given to me – making isn’t the issue.  It’s coming up with the initial concept which I find difficult.  If you are the same then here is a little tip that could be helpful.

I had an email from someone who wanted advice about doing a human/ape hybrid makeup.

I figured, as such a well trodden path that it would be tough to do something which would stand out.  It occurred to me (given that I didn’t know the design ability of this person) that a good way to get started may be to use a morphing app.

I figured if you get an image of an ape you like from somewhere, and then took a picture your subject at the same angle, you could use a morphing app to create a series of images which would essentially do some of the work for you.

By selecting a satisfactory mid-range image of the transformation, you can get a rough idea of what the face would look like at varying percentages of ape-ness.  Although the image it creates won’t be perfect by any means, it certainly can give a solid starting point from which you can start blocking out a rough design. 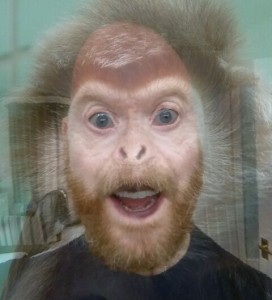 This quick test using a pic of me and a monkey took no talent or skill whatsoever, but would be a great starting point for a design.

I find this almost always gets me over that initial hump of starting out – once there is something there it can gain momentum.  I think a decent app can provide that starting point, and it doesn’t take any creativity to get going.  If like me you have creative blocks at the start, it can be a real lifesaver.

Try it with other creatures/animals/insects/sealife and see what turns up.  It’s a little like rolling ‘design-dice’ but there aren’t any expensive consequences.

Just a chance that you can stir up the creative sediment in your brain!
[stextbox id=”alert”]
Have an FX question?  Lets get onto it and see if we can help!
stuartandtodd@gmail.com[/stextbox]

Also, leave a comment below and let us know if you enjoyed this podcast and if there is something you’d like to hear covered.