It’s just that character makeups don’t come along nearly as often, and so I am indulging myself utterly.

For this years UMA Expo (United Makeup Artist Expo) in London, I have decided to create a character makeup which is a lot of fun.  Working on Emma, a fab artist whom I met on season 4 of Game of Thrones, I am creating a messed up and scary-assed individual who wouldn’t look out of place on a Jeremy Kyle or Jerry Springer show.

To see where it is up to now, check out the video below.
Warning – technical geekery afoot.

As ever with these kinds of makeups, the first task is to acquire the head to work upon, and so lifecasting earlier this year in silicone we got an absolute cracking lifecast to start work on.

Once the whole head was master moulded in silicone (for this process in detail, check out the video series on this very subject I did a while back), cores for sculpting could be made. 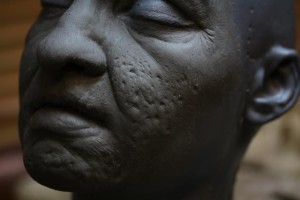 The sculpting core was plaster, and painted with grey acrylic paint to match the grey plastiline I like to use. That way, the sculpt doesn’t appear separate from the face and is less distracting.

The cast is then prepped with a couple of coats of a release agent (Scopas parting agent from Tiranti, similiar to Alcote) which can be sculpted onto when dry, and later reactivated in water when I am ready to make individual moulds of the pieces.

I plan to sculpt the face as one, to see how it all looks and then break it down into a face piece with nose and both cheeks, a separate chin and a neck with two ear appliances, making it a total of five individual appliances. 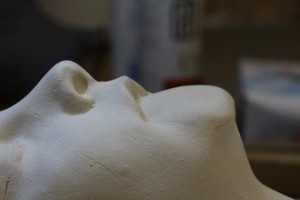 I also cover how the modified cores were made for the various appliances in the video too, so check out the processes there.

The biggest effort goes into making the cores nicer to work on and mould later, so taking the bottom lip and chin out to make it easier to sculpt the top lip, and vice versa for the bottom lip…moulding, remoulding, core moulds.  It’s always the most amount of effort on the things people don’t actually see. I liken it to working as a chef – it’s cool to like good food and all, but you have to love the back of house stuff that goes into making it if you want to run a kitchen.

Just enjoying a nice meal doesn’t mean you can be a chef, an likewise seeing a cool makeup in a movie doesn’t mean you would enjoy doing what it takes to actually create one. Those processes are for me fascinating and I get lost in doing them.  This video is a bit of a geek fest for which I make no apologies.

As always, comments below and questions always welcome.