That’s what most people will remeber most from the UK IMATS 2012.

But, I still had a fantastic time.  Despite getting stuck with no transport, sleeping on a grotty hotel room floor, shivering under a towel for a blanket in my clothes….

Paul gets his own back after sitting still for two hours...pic by Cerina Knott!

Seriously though, it was a blast.  The silicone bulgey-eye makeup went on well, and from other peoples videos I have seen on YouTube, Paul did a grand job of working the room with it.  It’s an odd thing, but you work hard to get a thing made, and then once you apply it, you are now out of the equation…your work is essentially done.  It’s now up to whoever is wearing it to do their thing and Paul doesn’t slack off in that department!  Apologies if you got chased.

I also did some Sculpt Gel demonstrations on the Mouldlife stand which was fun to do, and my thanks to everyone who stopped by to say hello.  I am always happy to chat and answer questions, and it was fun to speak with people from all over the world who had taken the trouble to travel over and say hi – a big thank you for coming.

Thanks too to Peter Tindall & Cerina Knott for these photos.  As usual I was too sticky, bloody and chatty to actually take any of my own and so relied on everyone else to be snapping away!  Cheers, guys!

Steve Adams during makeup application. You can't actually see it 'cos it's on the other side of his face, so essentially what you have here is two grinning bald blokes. Pic Pete Tindall. 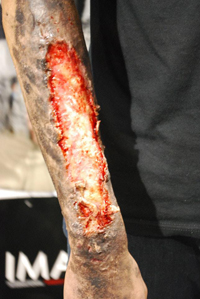 Mouldlife's Terry gets a scorched arm from a pot of Sculpt Gel! Get that in cold water, stat!

For those who couldn’t make it, I hope to see you at another show soon.  Incidentally, If anyone is near Düsseldorf, I will be speaking at the Makeup Artist Design Show on Saturday 10th March.

As usual, I will have a trusty pencil and pad with me ready to sketch out answers to any tech questions so feel free to get in touch.

All material, images and text © Stuart Bray 2012unless otherwise stated