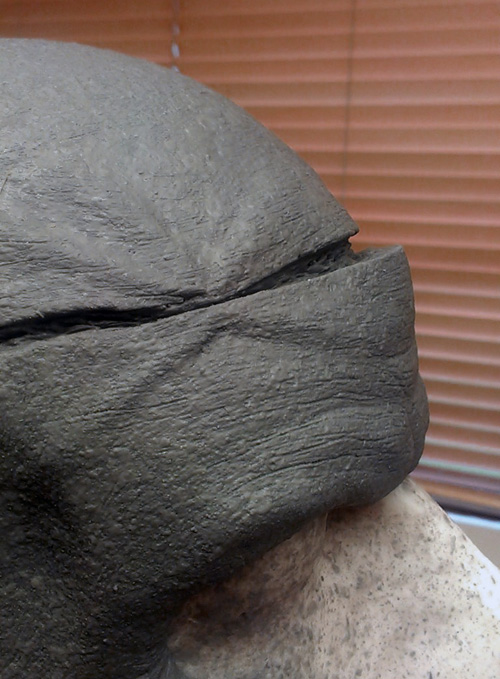 The Frankie 2 sculpt was finished today.

It was a real quickie – I don’t have many hours to spare for this project, so there has only been about six hours sculpting time on this.

The lifecast was done, cleaned up and recast in alginate and resin during the day (this Tuesday – see last post for more on that) and that totalled about six working hours…so this is about twelve frantic hours work to this point.

The whole top of the head is supposed to be like a cap where the brain was popped in, and there will be stitches around it to give the appearance the whole thing has been sewn in place rather hastily.  This means the tension lines in the sculpt are added now, so when I add the thread or staples later, the skin will appear to be pulled tight by them.

The ear which remains will be part of that top cap, just because I thought it looked more gross – no other reason.  I want it to look sore, so have a chunk of ear missing and a few sloppy  scalpel cuts around there, where presumably Victor was a little jumpy with the blade while getting closer to completing his creation.

The texture was very quickly done by smoothing it all out with a plastic wire brush, and using talc with a rake tool to quickly drag out multitudes of lines all over.  That technique is from Neill Gorton, and I must have saved hours over the years using it as a quick and convincing skin texture for large areas.  It stops it looking so fussy and contrived, and allows you to reduce form quickly to make it look much more natural.

Over the top of this is flicked a slip of plasteline mixed with lighter fuel.  That gives it a slight goose-bumpy texture when it is dry.  That’s all I have time for, so that is the sculpt finished.  I will also make a couple of small blender pieces for the cheeks which can be replaced after each use.  That way, the main edges on the face will always be hidden as much as possible.

I will probably make a mould in two halves in fibreglass, for speed and ease of use.  That will be covered in the next post!

This entry was posted in Sculpting. Bookmark the permalink.