After the rapid sculpting days, last night I edged up the cutting edge and over flow as seen below.  I used Chavant Le Beu Touche as it is quite a bit softer than the plastiline I used to sculpt in and it means I could crank this out a bit quicker.  It took about an hour and a half to edge this fella up.

Note the three keys (the white circles in the red clay around the edge) which I cut out n a countersink bit in a drill.  I tool a bit of time with a tool shaving o the edges of the keys to round them off and make sure there were no undercuts to stop the mould from coming apart…we’ll see tomorrow morning if this was indeed done correctly! Ahem.  The main areas that might cause issues are the nostril and the lip, but we’ll see. 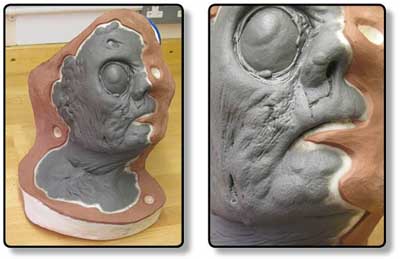 Then I made a clay wall around the edge to contain the resin while I swill the many layers that will make the mould strong enough.

The negative mould I used to make the core was kind of bowl shaped so quite easy to fill.  This on the other hand is a tad convex, so swilling is trickier.  It is a good idea to get some plastic on my nice workbench to stop the place from looking like the bottom of a birdcage.

Again, you can see the clay is supported by plaster bandage to keep it strong.  I will be rotating this mould a lot for an hour or more, so it needs to be strong enough.  Without the bandage, the clay would easily flop off and the resin would go everywhere.  Then I would cry the bitter tears of disappointment which I haven’t got time to do.

Then I give the mould a good spray with a mould wax to act as a release.  This will help ensure that the resin I swill in here doesn’t bond to the resin core which is exposed around the edge of the piece (that white coastline you can see there) and the drilled keys around the edge.

Once the wax has dried (the propellant and thinner used to enable a wax to get out of the can needs to have evaporated) then I mix up a mix of resin (about 300ml) and swill everywhere carefully trying to not trap air bubbles n the deep areas (below left).  Over about ten such layers, I build up a nice thickness.  I allow each to set before applying the next, and it takes about an hour and a half to do all this. 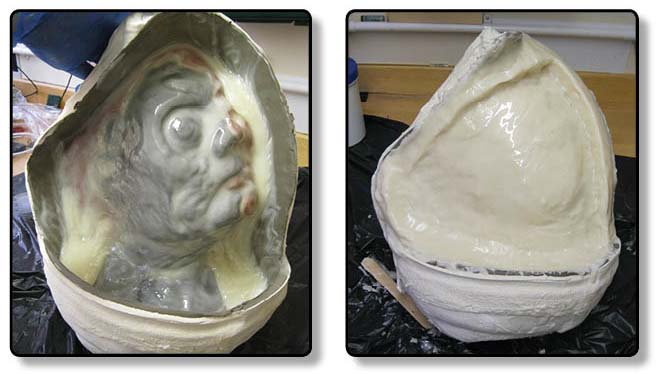 The resin gets warm as it sets so I need to allow this block of plastic to cool down for a few hours until I can open it.  I’m off out to watch The Iron Lady tonight and see Mark Coulier’s fab makeups in action on a big screen and I will open this mould first thing tomorrow and – fingers crossed – have some pics of a good, functioning mould to show you!

Thanks for your time!