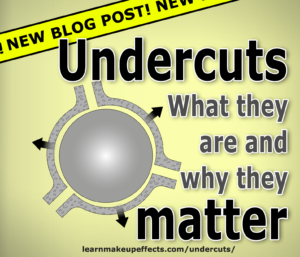 One of the biggest tales among mould making folklore is the curse of undercuts visited upon unfortunate souls who failed to spot them.

I figured it would be a worthy subject to throw some spotlight on and look at what undercuts are, why they are a problem and what we can do about them.

What is an undercut?

Essentially, it is a shape which has surfaces not visible from a single angle. In itself, it isn’t necessarily a problem unless a rigid mould is being made of that undercut. Mould pieces are pulled away from their casts in a single direction, and if that undercut goes the opposite way to that direction, then you could be in trouble.

They can be slight or extreme, and most commonly in FX stuff it is down to the curvatures found in a shapes of the human body.

To demonstrate the principle, imagine for example making a plaster mould of a plaster sphere. In order to get the mould open and make the mould in as few pieces as possible, the mould would need to be in at least two halves, and those would have to be made to meet exactly in the centreline. 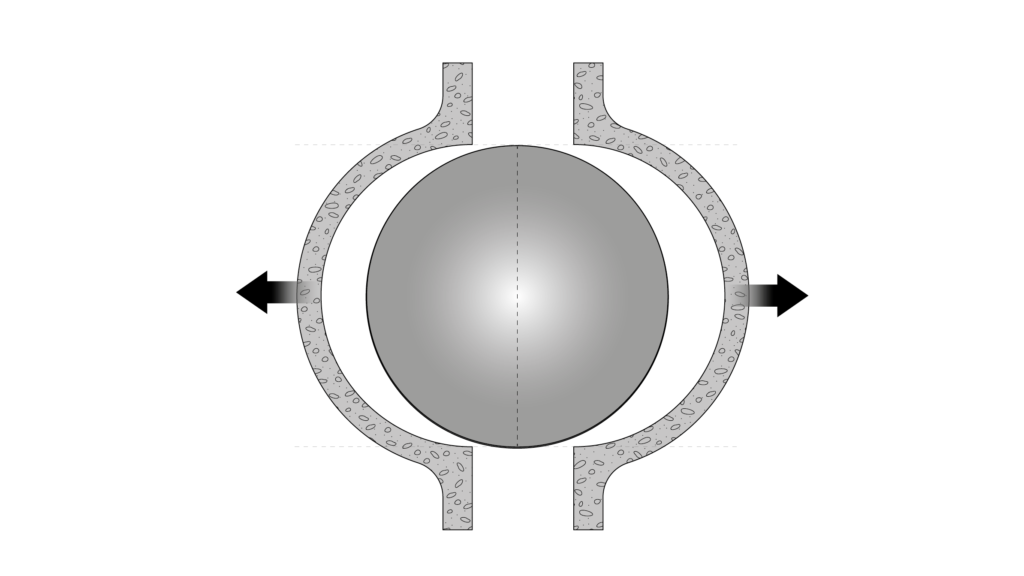 If one half was slightly larger than the other then one half of the mould would pop off whilst the other essentially was locked in, and either the mould or the sphere will need to break in order to separate them. 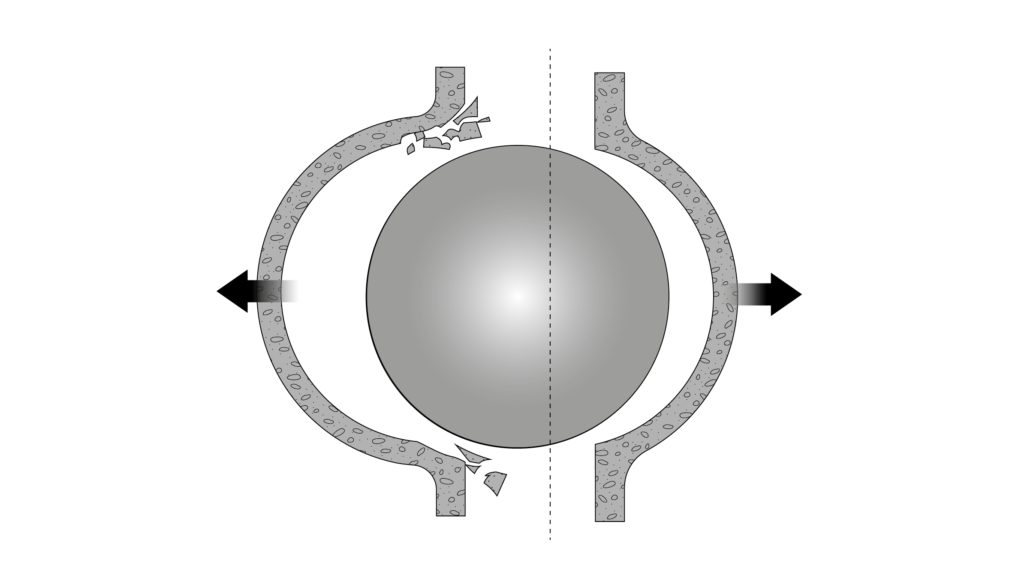 The alternative is make the mould in three or more pieces to make it much easier to open (more work and an extra seamline to fix) or to use a flexible material such as silicone which is able to flex and allow the pieces to separate more easily (extra expense and time). Either way, if there is an undercut then it needs addressing. 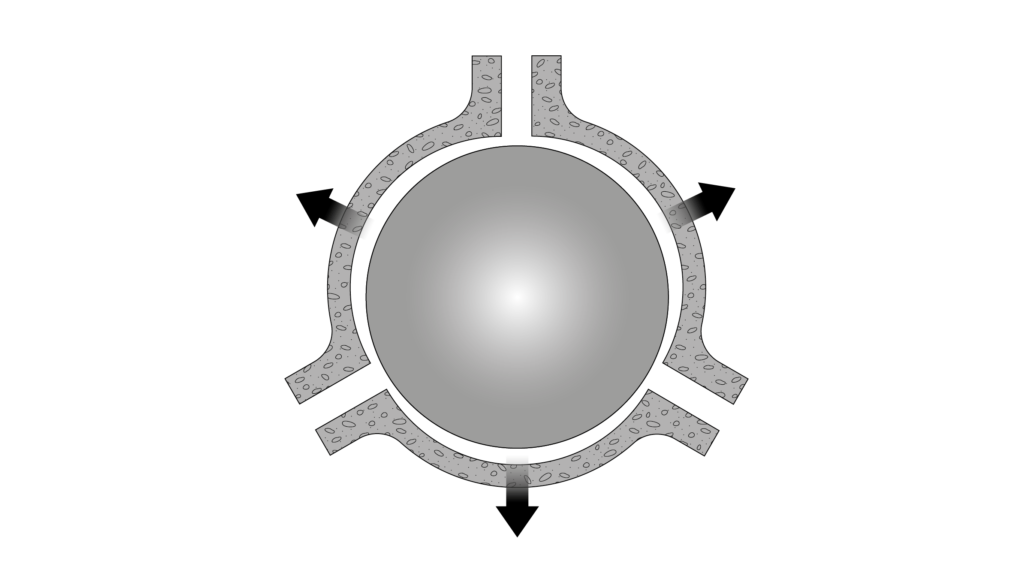 Common places for undercuts on a face can be on a nose, where the wings of nostrils flare out and then return to meet the cheeks and top lip. It’s possible a nose may have a more obtuse angle here and consequently present no undercut, but often this is not the case. 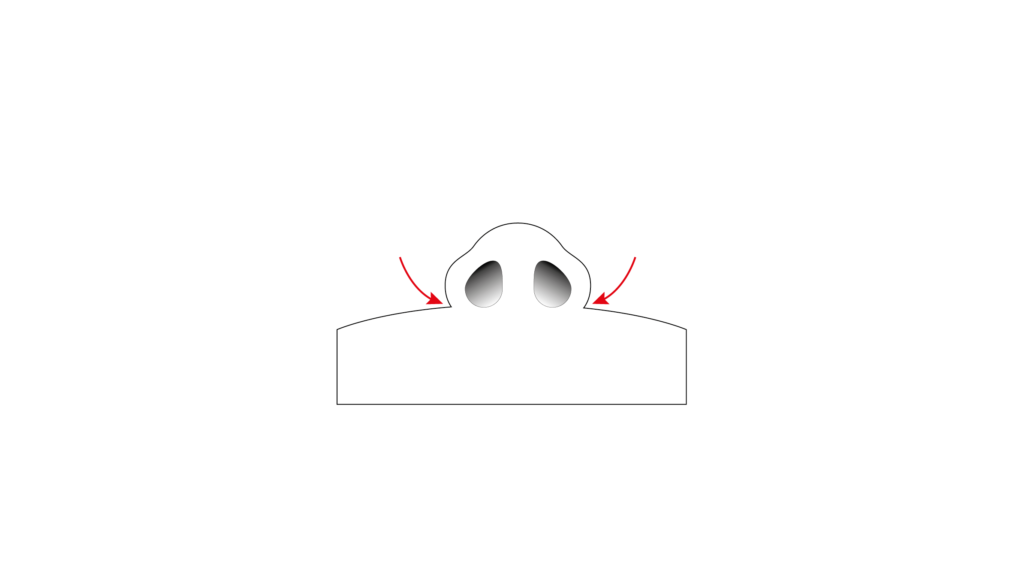 Even a slight undercut can cause rigid moulds to lock with something having to break in order to open the mould up, likely ruining the mould or pieces made from it. If the mould does finally open, then the broken areas will be seen in pieces cast from it. 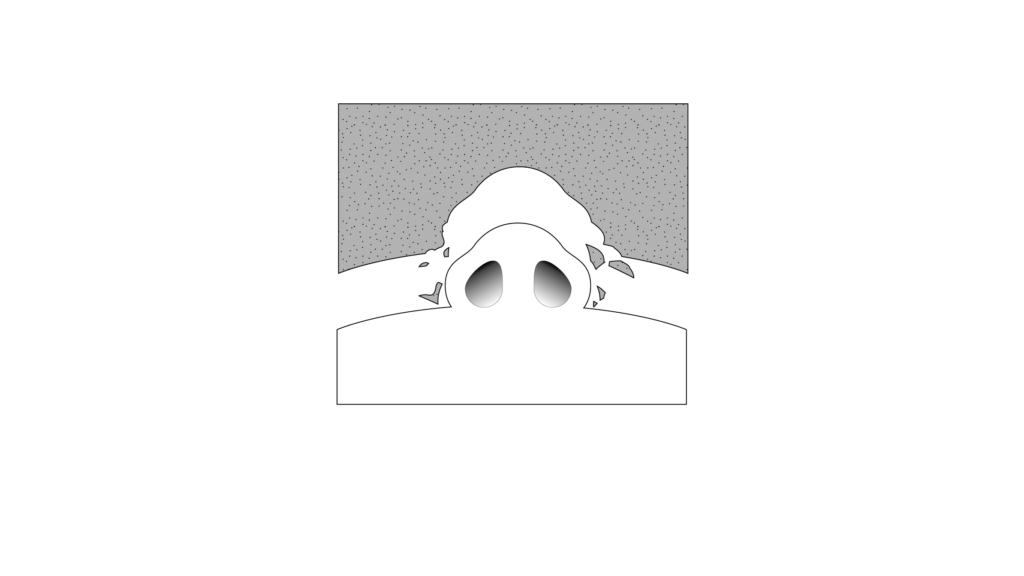 Things than go ‘inwards’ on a positive such as a face cast will come ‘outwards’ on a mould of it, and these can be thin or fragile outcrops of material whose broken shapes will be visible in the appliances, usually meaning a do-over. Not a welcome prospect.

Anyone who has made a number of moulds will certainly have come across this phenomenon and hindsight is 20/20 so there are a number of strategies  exist to deal with them.

Solutions to the problem

Naturally, the easiest is to make moulds of everything in silicone which can be soft enough to bend where rigid materials would break. This may seem like a logical answer and it may indeed solve some problems, but let’s not be so prescriptive about that. 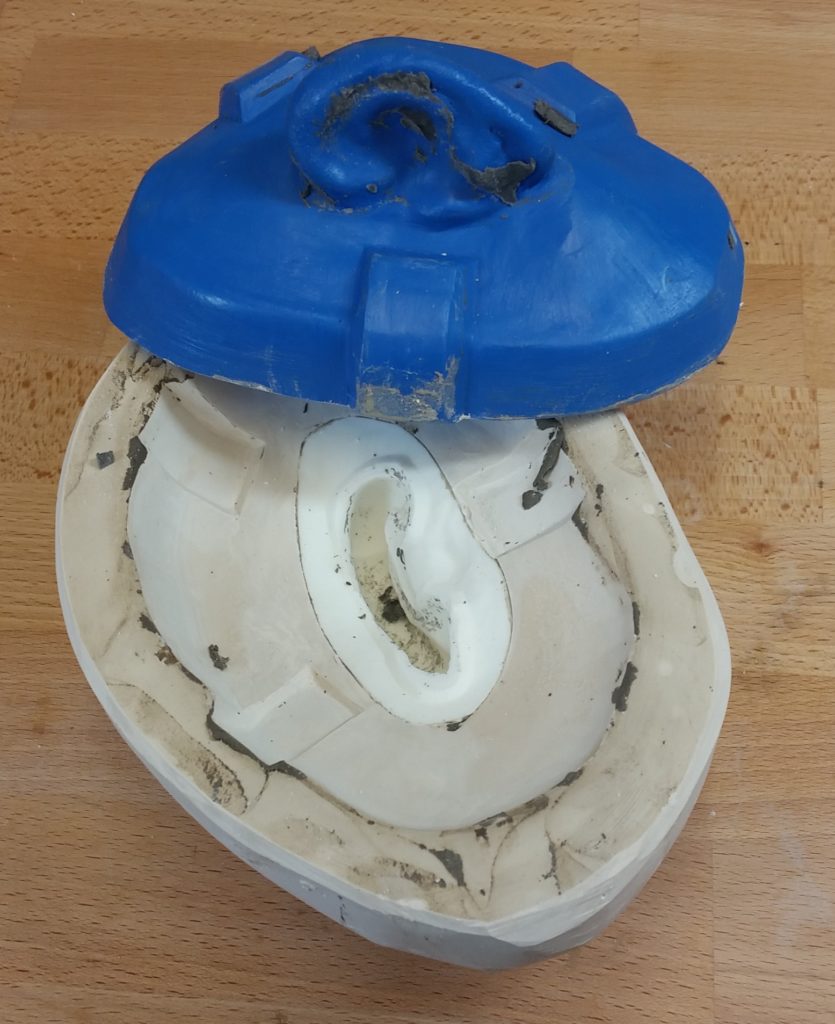 Ears are notoriously undercut with their many curves and indented negative shapes. Filling these in and remoulding them as simplified shapes helped make these ears pieces work well, especially with a silicone negative.

For one thing, silicone is expensive and often needs a supporting jacket to keep it in shape so it adds time, expense and possibly size to a mould – which if totally necessary is worthwhile. However, if something can be made quicker, cheaper, lighter and smaller without silicone then it isn’t a terrible idea to do so.

Also, it isn’t just about being able to open the moulds, it’s also about getting a mould to close without touching. The majority of silicone appliances need mould surfaces to be prepared with an encapsulant of some kind.

If parts of the mould smudge past each other on closing, you could damage that delicate surface and not know until you’ve gone through the process of running that appliance. Not until that material has cured and the mould opened will you know whether or not that mould is doomed to fail the same way every time.

Another is to make a mould in more than one piece to allow those pieces to be opened in different directions. This is often a tactic used, sometimes if there isn’t a major undercut because it simply makes it much easier to open the mould. The trade-off is that a seamline is inevitably created, (although a good mould will yield a thin seam which is of no major consequence).

It may be that a tight fitting or large mould requires a lot of pulling and prising to open, and these stresses on moulds can cause unwanted damage (especially if many casts are required from the mould), making a thin seam a fair price to pay for a much easier opening experience.

This is where good mould-making is a great asset in a work pipeline where multiple casts need extensive seaming. A good mould yields pieces which are easier to repair and so have a real dollar value in the long run.

Sometimes a sculpt is modified in order to address undercuts, and if increasing a thickness here or extending an edge there or cutting something back doesn’t compromise the design too much then it’s a perfectly sensible way of fixing that issue.

Also, any cutting edge or overflow clay which is laid down can fix the same issues – the thickness of the clay laid down can cover minor undercuts just the same as a sculpt. The principle remains the same – the mould doesn’t get to meet the cores surface at a point where an undercut would be created.

Finally, and possibly my favourite, is to fix the core before sculpting begins. This may involve taking a tool to scrape away the plaster on overhanging eyelids extended to the weight of casting material used during the original lifecast.

It may involve filling in nostrils with clay, flaring out necks or extending sections in order to provide a flat and smooth area to put keys, bolt holes, touchdowns, pry points or whatever else may be necessary to make a mould work well yet would otherwise be tucked around the back of  a shape and would make opening tricky. 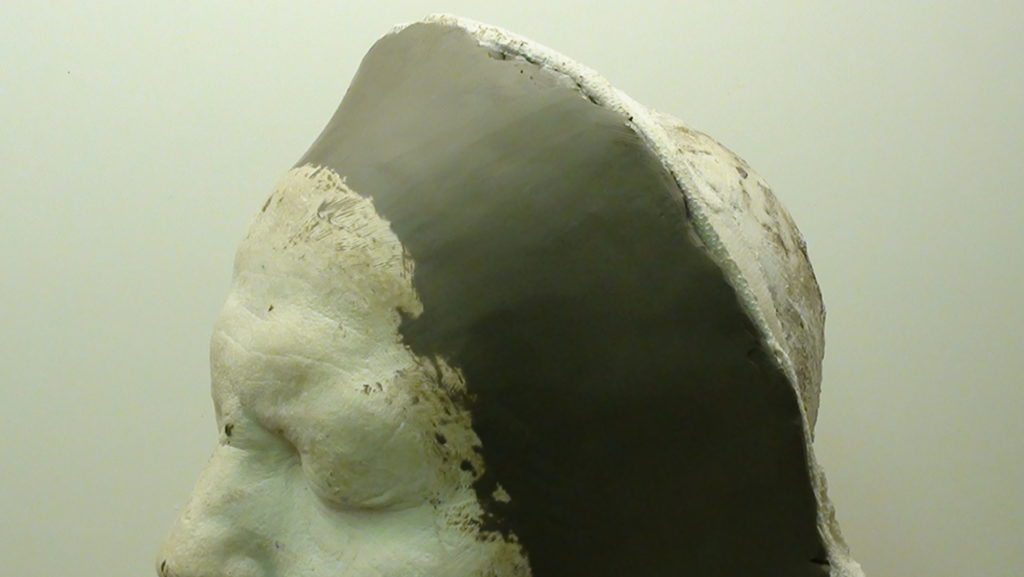 Clay added to the plaster original creates a flared out area. Mould this to cast out duplicates with a flat area built in to place keys, overflow and pry areas later. 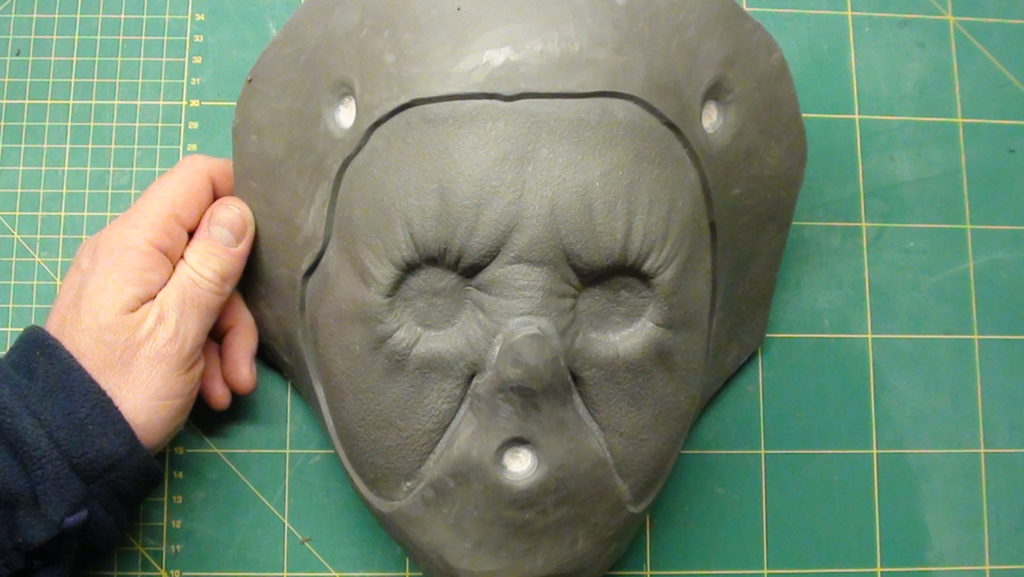 This is often a great way of taking the problem away early on (although admittedly at more time and expense as a mould is then usually required of this modified version) as the mould is then made purposefully from the outset to function at its most efficient.

Being able to get a piece out of a mould easily is a great feeling when THAT part of the process is at the tail end of a job when time is at its least available.

I’d rather over-engineer a core and make a piece fall out of the mould than rush through things and be praying every time it came to open the mould.

Usually, the solution is a mixture of these techniques, depending on what you have most of – time, money or nerve.

Have you had any howler undercuts in moulds? Have a cautionary tale?  Let us know and we can feature them in a post! Email us at stuartandtodd@gmail.com!